It’s true, farming isn’t just about dirt. If someone asks what you think about when you hear the word farm, the most likely mental images that first appear are flat fields of golden winter wheat, high corn stalks glistening in the morning dew, or cows lined up head deep in the feed trough. Farming is more than growing crops and raising livestock. Farming teaches you lifelong emotional, mental, and physical lessons to carry with you through all walks of your life.

Farmers are rarely boastful, if at all. Few of their hidden traits are usually exposed for others to see, but rather only for themselves. Some of the greatest highlights for farmers are the emotional highs at the end of the season. Feelings of accomplishment and joy are fueled by silos full of grain or a large head increase of their herd, which the farmer knows helped put food on families dinner tables, including their own. Self sufficiency describes many farmers. They’re resourceful in their ways of planting and harvesting. Over the centuries, the Inca farmers of modern-day Chile and Peru, and the Asian rice farmers perfected the methods of step farming.

Farmers learn the importance of patience and perseverance. A lengthy winter cold spell means the last frost takes place well after the seeds should have been sowed, and the growing season is shortened. Too little or too much rain can dry out or drown the crop. If all is ruined in the summer, perhaps in the fall the farmer chalks it up as a loss and plants a new Winter crop, knowing he’ll still be able to make ends meet. That would be steadfastness.

Whether grown on 300 acres or a half-acre garden in a backyard, the crop’s caretaker must possess ingenuity. A rubber seal on the tractor broke on Friday evening of Labor Day weekend and the replacement part can’t be bought for four more days. The ingenious farmer will most likely fashion and cut one themselves. The owner of the backyard garden travels four days a week for work, so he buys some pipe, rubber hose, and a timer. He lays out a watering grid and sets the timer to water for fifteen minutes a day while he’s away from home. 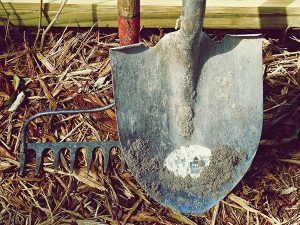 When one learns healthy ways to deal with disappointment, it makes it easier to cope with it when encountered again later in life. Sometimes entire crops are lost. Maybe a hailstorm flattened the field or a late frost killed the buds. Maybe a disease struck the herd of sheep. Farming is immensely gratifying, but it’s not without its lows. Disappointments are often turned into an opportunity to learn, and take a lesson to heart. Lord knows farmers put their heart and soul into their land.

Finally, farming is a solitary occupation at times. Fred Rogers, most widely known for his television personality as Mister Rogers, makes a compelling argument for time spent alone. He has a strict regimen of waking up at 530am every day, which is considered sleeping in to many farmers. For a few hours before he went swimming, he used time alone to reflect. When alone, all sorts of racing thoughts run through your mind. According to Fred, quietness or time alone meant personal reflection, and personal reflection led to thankfulness.

True farmers consider the land and animals an extension of their own flesh and blood, which they freely give to continue to breathe life into it. Dirt can be thrown into the air and blown like chaff in the wind, but the animals, land, and farmers themselves are firmly planted and ones which we could all take lessons from.